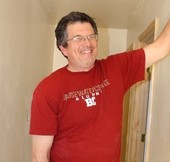 Jeff Postans
My love with missions grew out of my involvement with the Boy Scouts of America back in the early 1970's when I learned the Scout Slogan "Do a good turn daily" as well as growing up in the Church of the Brethren. As time went on being a volunteer at church summer camps, participating with Circle K at Bridgewater College in various mission projects (CROP walk & handicap awareness) strengthened the desire and willingness to help others. After college I continued on with the Boy scouts in various leadership roles (assistant scoutmaster, scoutmaster, den & webelo leader). I became involved with Farmville UMC in 1982 and started working as a volunteer youth leader until 1997. In 1994 I was on a mission team from the church to go to Ottumwa, IA to help with flood relief. Since then I have participated in mission trips to Georgia, Southwest VA, West Virginia, North Carolina, Mississippi, South Carolina and the Eastern Shore of VA. I have been working with the Wesley Foundation on missions since 2007.